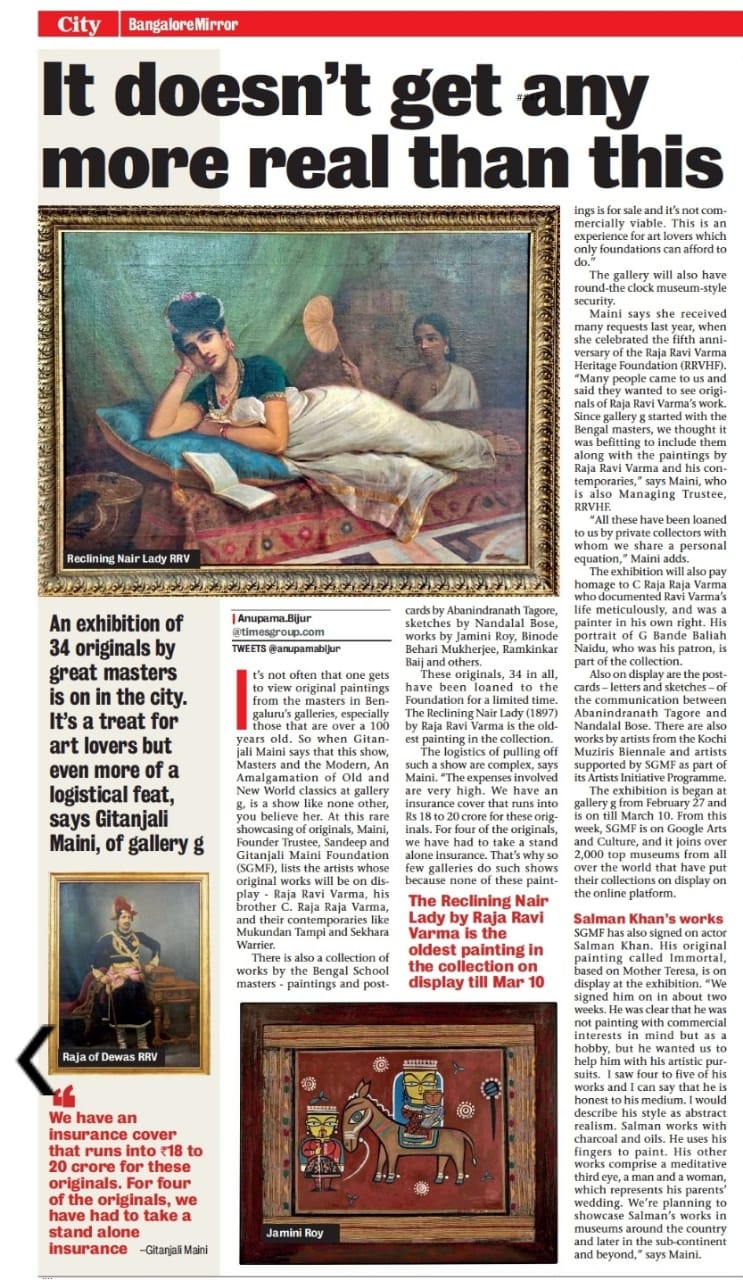 The exhibition titled The Masters & The Modern, An Amalgamation of Old & New World Classics features unique paintings that were bought by private collectors and have never been on display before.

Interestingly, these works of art have been insured by the foundation because these original paintings are of high value and are heavily guarded at the gallery G where they are on display.

For art patrons who are not in the city and would like to view these paintings, some of these are also on display virtually on the Sandeep & Gitanjali Maini Foundation gallery on Google Arts and Culture.

Gitanjali Maini, Founder Trustee of Sandeep & Gitanjali Maini Foundation said, “It’s been 18 years since we have been working diligently, and silently, to help art and artists survive in a hard and sometimes harsh ecosystem. In the process, we took on projects of historical and cultural significance as well. A country’s artistic community will not flourish if there aren’t enough patrons around. Sometimes buying and collecting art is not enough, and one has to do a lot more to keep the creative ecosystem thriving in a country. I hope people will be encouraged by the work we have done through SGMF and open their hearts to this extremely talented community of creative individuals,” she said.

What makes this exhibition special? Well, for starters, the exhibition does not stop with featuring artwork but also explains the story behind each painting/photograph. ‘A picture says a thousand words,’ has never been more relevant than it is in this case as each work of art conveys a story and has a history of its own.

Apart from the work by the masters, the gallery is also showcasing work by Bollywood actor Salman Khan who is now being represented by gallery G.

Salman Khan who surprised his fans a few years ago by displaying his artistic skills had unveiled his works for the first time in 2009 in Dubai for a select audience and sold out the entire collection. Following this enthusiastic response, he embarked on a journey to evolve his art. Now, 11 years later, his sought-after painting of Mother Teresa, is on display at the gallery. The actor intends to donate all proceeds from his art to charity.

The gallery is also showcasing a few images from photo artist Shibu Arakkal’s work, Boatmen of the Kumbh. These images document the untold story of the fast-vanishing community of boatmen who are integral to the ethos and ecosystem of India’s Kumbh Mela.

Work by other artists such as Valsan Koorma Kolleri, Bara Bhaskaran, Subrat Kumar Behra, Bose Krishnamachari, and others is also on display.

The exhibition is open at the gallery until March 10, 2021. At gallery G, Lavelle Road.