Many Masters Along With Salman Khan At Gallery G 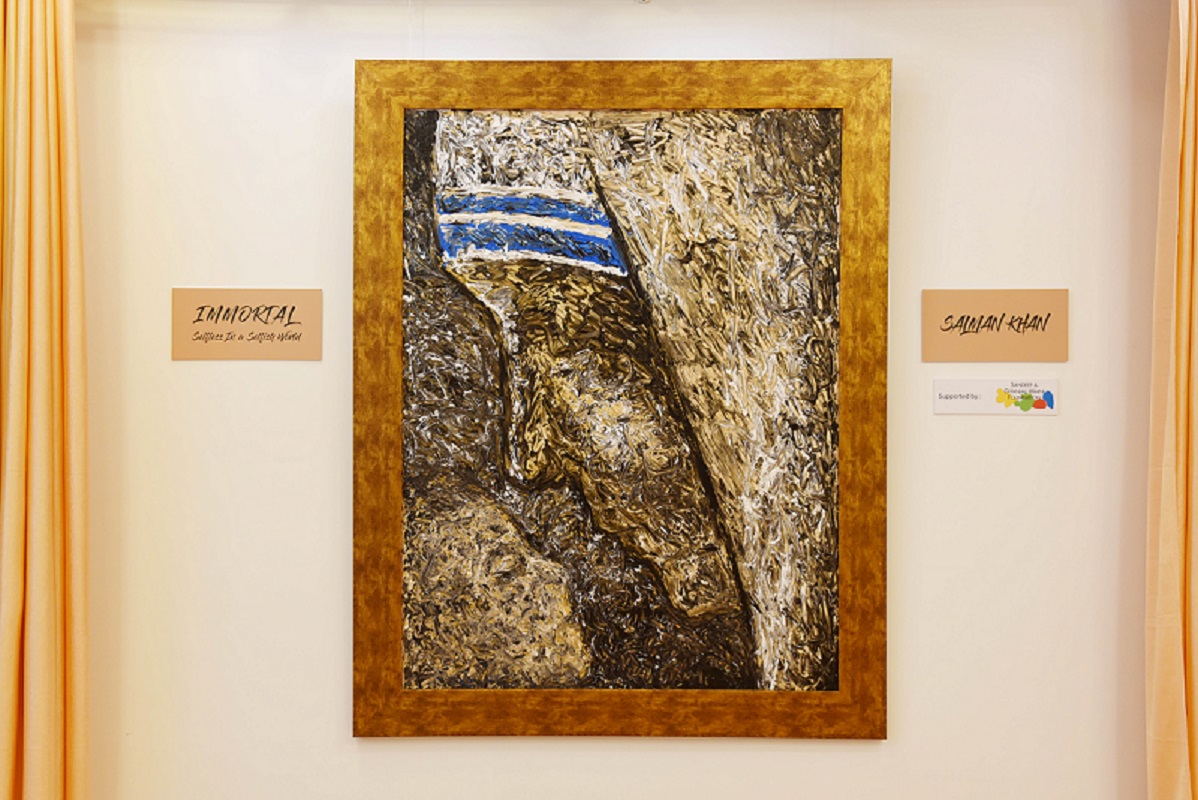 Actor Salman Khan and his solo painting? Yes, you have heard that right, and if you want to witness this surprise offering from the Bollywood star, walk-in to ‘The Masters & The Modern, An Amalgamation of Old and New World Classics’ at Gallery G (on Lavelle Road) brought over by the Sandeep and Gitanjali Maini Foundation in association with Gallery G. The ongoing exhibition of rare classic artworks will be on till March 10.

The work based on Mother Teresa, done by Salman, brings his lesser-known side to the fore, and his passion for painting has his hobby going on for several years now. “He wanted it displayed to help him further his artistic career. Though the work is not for sale, it is put on display alongside the works of other young aspiring artists,” says Gitanjali Maini, Founder Trustee, Sandeep & Gitanjali Maini Foundation, and MD of Gallery G.

Apart from five breath-taking original works from Master Raja Ravi Varma and some more from his contemporaries, there are works by Abanindranath Tagore, Nandalal Bose, Ramkinkar Baij, and Binode Behari Mukherjee. Also on display are works by a generation of upcoming artists who have participated in the Kochi Muziris Biennale editions.

“What is different about this show is that all works by master artists belong to Private Collectors and have been loaned to the Foundation for display only. None of the works by this enviable group of master artists are for sale,” says Gitanjali Maini, in an exclusive interview for BalconyStories.

Maini Foundation works to preserve and promote history, heritage, art, and culture, reaching out to collectors from all over India. What’s so special about February/March that you have an exhibition of this scale?

I started Gallery G 18 years ago on February 26th, 2003. Much of the Foundational activity began alongside the same year. Hence the month has special significance. On February 26 this year, we formally launched the Sandeep and Gitanjali Maini. Foundation’s association with Google Arts and Culture. We have done projects we have worked on, curated, and commissioned are all documented on this virtual platform for the world to see. On March 6, we are launching five new exhibits on Raja Ravi Varma Heritage Foundation’s Google Arts & Culture space to commemorate C Raja Raja Varma’s birth anniversary, the younger brother of Raja Ravi Varma. He was a brilliant artist but ignored as he lived in the shadow of his older brother’s fame. We felt it was time he received his due for his contribution to Ravi Varma’s life and art.

What does it take to have such heritage works sourced from private collectors and displayed for public consumption?

It’s taken us nine months to plan and execute this show. The works by master artists like the royal Varmas and other contemporary artists followed in his footsteps works by Bengal Masters like Abanindranath Tagore, Nandalal Bose, Jamini Roy, and Benod Behari Mukherjee… all belong to collectors from across India. It’s been a Herculean task planning the whole journey of these artworks to have them displayed. The gallery is nearly 3500 sqft, and we are not entertaining more than 10 visitors at a time. We are taking all the necessary precautions to keep everyone safe. After many months, the gallery is seeing a steady stream of visitors. We have also been having batches of guests who register and come in for a special Curator’s Walk to understand the artworks better.

Comment on the works of Raja Ravi Varma’s brush, Vs. his brother C Raja Raja Varma and their contemporaries Mukundan Tampi and Sekhara Warrier who “followed the master’s style…”

Ravi Varma ran what we like to refer to as an artistic enterprise. His brother C Raja Raja Varma, 12 years junior to him, painted alongside him in his studio. As did Sekhara Warrier. While each one’s finesse with the brush is different, they were all brilliant artists. Raja Raja Varma was especially brilliant at landscapes, but we have two portraits done by him on display in the exhibition. Similarly, one work of a young noble couple by Sekhara Warrier is on display as well. There is a magical quality to Ravi Varma’s works, a special gift that radiates from his canvas.

What about the works from the Bengal School of Art?

Bengal Masters are lesser-known in the Southern part of India. Like Ravi Varma, whose work is globally recognized now, the Bengal Masters were brilliant in their own right. Unfortunately, not many people in Bangalore get the opportunity to see or appreciate their works. We have assorted works by nine Bengal artists on display. All of these works belong to private collectors from Bangalore, New Delhi, and Kolkata.

What is the main reason for India not following the West, where private collections are not displayed at galleries and museums?

I feel that art collectors need to be more open about what they own or collect. In India, we have noticed that art is more about costs and prices than acknowledging the effort one is putting in to preserve and collect priceless works. In the West, collectors display their entire collection in a museum for public viewing. This enables museums to draw in footfalls, at the same time, educate people on art, patronage, and collecting. That’s not the case in India. Most private collectors, barring a handful, choose to keep their collections locked up in vaults or homes. The layman never gets to appreciate these works. Hence this exercise of connecting with collectors to convince them to showcase their collections in a gallery.

So you have the surprising work of art based on Mother Teresa by Salman Khan?

The team approached us that managers Salman Khan’s art, APG World, to take a look at his art and provide some suggestions. We were pleasantly surprised that he was excellent. His technique, using his fingers, was exceptionally refined, and we felt that his work had immense potential. Salman has been painting for several years now and has more than 150 works to his credit. However, in his painting ‘Immortal’ that we have displayed, his technique is unique. We’re happy to have included his work in our Google Arts and Culture exhibit on the Sandeep & Gitanjali Maini Foundation page.